Eight fifteen in the morning and the coffee is gone. No wait, one more sip and now it’s gone. Crack Brew, pull back gulp cold beer, a reward for words…

And about twenty minutes ago I finished the first final draft of book one in the More Adventures of a Dying Young Man series. I titled it Book (A). I decided this instead of the full novel for many reasons but when I got down to printing costs it makes more sense financially for now as I’m part of a very small Indie Publisher that’s just trying to gain some ground. Once again the cost will be low, around twelve to fourteen dollars and as well there will be free shipping. I just want people to read the damn thing because (for good or bad) it’s going to be unlike any book you’ve ever read. Anyway…

THE BOOK, well as many know, it’s taken me a long time and why count how long it took because before noon it will be done. I have to do a re-read and then catch a snooze and then wake up and read it again and send to a pal who I’ve been working with and he’s going to give me the green light. If all goes well I’ll have it released sometime today.

By-the-way…I called it a novella but I don’t think I can really do that because it’s well over thirty thousand words long and reads like a book. It’s an in-between I would say and I don’t know. That’s about all I have to say. One more smoke and a few jumping jacks and back at it. Last all-nighter of the year for me and I hope you’ll buy the book. Thanks for reading and have a great rest of the year.

P.S: I know I said this will be the last post of the year and it will be, but when the book is done I will be advertising it on both this blog and the west vine press blog. It’s a real book, and for now there will be no digital download. I did all the cover work and made it like an old-school pocketbook. I think its real good and if you don’t like it I will buy you brunch. That’s a promise. See ya’ in 2014. Thanks for reading.
Here’s a page I made for the author info, something maybe different who knows….and then after are some more thrown on the streets books.
Be cool. 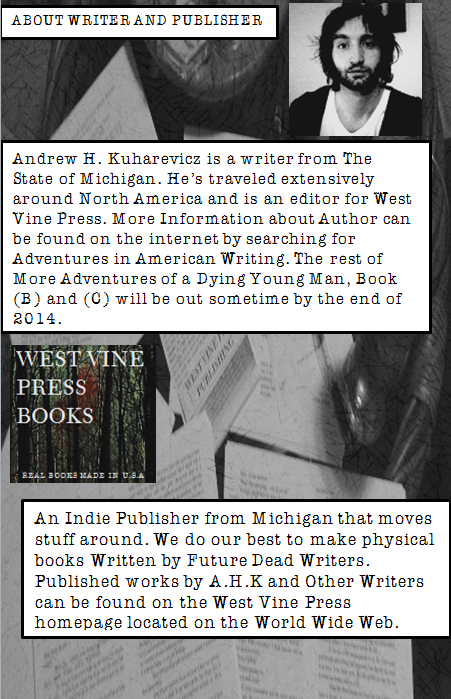