Is it just me, or is your coffee always cold too? I think this is probably a curse of the writer.

I’ve been working on getting back on the regular move stuff around clock, and let me tell ya’, it’s a slow process. I get one hour closer every week. This 630-130 sleep pattern is sort of nice though. You go to sleep watching the Kudlow Report on CNBC. Some five hours later you wake up and that old river money man in suspenders is still talking about the future. That station is the new HISTORY CHANNEL (2) for me, it’s replaced the ALIENS GUY. For some reason it’s like Baby Mozart to my ears, a binary Mobile with hanging strings of ones and zeros, sweet lullabies made from speculating if the American Dream died a little more or little less today. There’s so many numbers I just zonk out. What the hell? It feels like I’m back in social psychology watching the Stanford Prison Experiment for the billionth time. I don’t know why my professor loved that old flick so much. I mean, I get it man, but you just showed it two weeks ago. This ended up all making sense when I saw him one time at the grocery store and his cart was overflowing with cereal boxes. I said “hey, you like captain crunch.” he said “yeah I do”. I said goodbye and he didn’t. He talked about class and Pavlov while following me around the store until I snuck away in the dog food aisle. That guy was a good teacher but very weird. DAMN. This is a totally different story so let’s get back to the waking up…

WORD OF THE DAY

Some time later I’m on my bed with shoes still on. There’s sand all over the place from The Lake and it smells like Zesty Italian dressing because I was eating a salad and only got half way through before the BIG NAP. I’m an idiot and the fork is sticking to the side of my face and the bowl tipped over so that’s why I change my pants. I don’t really ever know what’s going on, but this is even more prevalent when I wake up. I just don’t get IT. Everyday my reflection looks like I was crying and repeatedly punched in the face. Red marks and lines and by this point I’ve had enough of Mr. Kudlow. Give somebody a break already…

As I walk into the bathroom he’s yelling at Detroit. Damn. I look like a bloodhound and what’s better than anything else, is that next, it’s time for a donut and some chocolate milk. 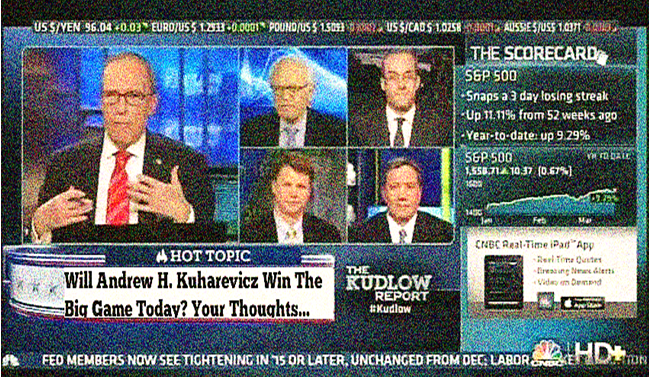 Almost falling over my legs broke down for a second…

Humans forget how much shit we have to do just to exist. Great. Now Kudlow is talking about why the Feds are pissed. I’m still dreaming. I’m in suspenders. I’m the man with the slanted grin. I’m on the stereo. I’m Kudlow’s Special Local Correspondent. He says, “How’s Muskegon’s Economy doing?” I tell Kudlow that it “Sucks Badly”. “I bet Andrew”… and then there’s a commercial break for some sex pills.

Nope. Turning the boob tube off I say “what the fuck society” and go brush my teeth. Slowly I go outside and look for the big dipper. Some times you can see it and other times you can’t, because of clouds. You cant see it today. Who cares…I do. I like stars.

Thank you I tell myself. I don’t know why. I appreciate that my body gave me another chance at living I guess. This is how I prepare to get back into the writing mines. After you snap out of dream land you make some coffee, and then, you wait.

This schedule is alright. I mean If I wasn’t a writer I’d be more like the weed whacker and this time of day I’d probably be lonely and depressed if I was awake. I’d be drunk or making children or something, just getting into trouble like a good ol’ hooligan.

I like it, because for five hours there’s actual silence. I can only take the sound of the moving around for so long. I’m getting too old for this. I feel like that retired detective in my book who wont just leave it alone already and enjoy early retirement. Old Man Lee Roy. Rest In Fake Peace. CUT and RUN.

P.S SONG OF THE DAY