The years of 2007-2010 were some very strange years for me as a human being, and a year after graduating from college the great recession was having a major impact on the United States, and states like Michigan that were now in the middle of the postindustrial transformation were blinded by the almost total collapse of the United States Economy, and how easy it is to forget when you’re not poor, but many people like myself with degrees in the social sciences, well honestly, we were basically useless to a society that was unknowingly falling into complete chaos.

I started writing when I was given this sears typewriter, and I had to use a

tooth-brush to keep it from sticking, and after having my hours cut as a security guard, having my power turned off in the beginning of the winter, owing overdraft fees to national city, being arrested for parking tickets, and basically just being stuck in life; well as the shit as they say was piling up, well I came the closest I’ve ever came to thinking of actually just ending it all. I don’t think I would have killed myself, but thinking about it was bad enough.

And NOW, well this post is about what was darkness, and yeah, it’s even hard to write, but I’m in the post darkness years now, so yeah I’m alright, and yeah, I made it out alive, so FAR. Ha.

And the internet makes life timeless, but life is based on growth. I’ve come a long way since I started writing, and this book that I wrote called a Spontaneous Revolution, which in its own way was very prophetic for many of the changes we have seen in the Middle East and even with the occupy wall street movement, and well for better or worse it is about when I wanted to become a writer, and once I made that choice I knew right away that there was no looking back. It was never about money or fame or anything like that. I knew that I would probably live a life without many of the material items that people associate with success. What it was about was saving my own life. Writing has always been about searching for and being happy, and still, still man, yeah it’s hard, but yeah, I’m happy when I’m writing, and this is good enough for me.

Happiness and finding life, this was the point of writing a Spontaneous Revolution. I wanted to run and to get away from my fear of the people who I didn’t even know. I would freeze at night and couldn’t sleep so I just typed. I don’t think I ate that much either, but with cold fingers I stayed up and just let it pour out.

One day I abruptly headed south on the greyhound, and man oh man was I renewed. I thought of it as an adventure and I remember carrying that typewriter around with me and hanging out on the streets of Atlanta with it; I must have looked crazy, but yeah it was exactly what I needed. 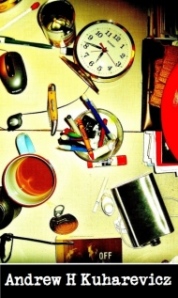 Being a college kid during the great recession was tough, and yeah I’m still a struggling writer, but I think I’ve matured as both an artist and as a person. Now, I really do love more than I fear, and for certain I know that I’ve become a good American man, a good human being, just one individual that is on a path to somewhere fulfilling.

As I was editing my collection, and I’m in the cutting part of the progress, cause I want to get the book down to 300 pages, and I was thinking what to remove, and even though I don’t want to censor myself I wanted to remove some of the darker material, so young adults and old people and individuals from all belief systems could read my collection without getting too pissed. Not because I’m scared, maybe a bit, but honestly I want people to think about funny and good times, and I don’t want to turn them off with how harsh some of my days were. Yeah it’s a fine line, but yeah, I want to sell these books all over to everywhere I bring it, and I’m introducing who I am all over again with these two books to the general public, the other being Adventures of a Dying Young Man.

revolution, and it is under this post in PDF format if anyone cares to read it. It’s ten pages of anger, of someone who was I, and who probably should have been under suicide watch. I don’t know that person anymore, but I do remember him, and I wish I was there to talk to him back then, to just be his friend, but if that was possible I wouldn’t be me, the person that loves life and still struggles, but passes with  hope through the days that are now and are yet to come.

The hard times are what have brought me peace. So I share, and take it for what it is: a Spontaneous Revolution is about a narration of a person who doesn’t have a clue. A person who is lost and wants to do something with their existence in a world that seems to be just as lost as he is. I didn’t even know how to write a book back then, let alone what words to use, and style, no clue.

At the heart of a Spontaneous Revolution you will find joy, but first you have to rid yourself of the hate that the world seems to burn so brightly with.

Now: Life is good. I had to learn that the hard way though, and so yeah, whenever you have the time, and that goes for me, here it is. Archive and note to self, the introduction.

P.S. The book is still out there. This will only be the case for the next couple weeks. My old titles are going out of print and maybe a possible reprint when I have time to a re-edit. They need some time to sleep for a while. I wasn’t ready yet back then. I thought I was, and like fine wine they need time to ferment. Thanks to those who read this far. Cool. Bye.

Intro for a Spontaneous Revolution