So what I thought was going to be a simple read through has turned into a complete revision process. It’s moving much further along (quicker) than the fourth revision stage took. That said it’s still way behind where I thought I’d be. It’s not very easy because it’s very difficult getting through the panic of starting, the remembering to just go at it man and take it easy. I don’t know how other writers handle it but it’s kinda a mess for me. Everything becomes scattered except for that one document. I forget to do laundry and my desk looks like a fallout shelter that slowly has rusted over and nobody knows what’s going on down there. Out there it’s clean and normal and in here well the story really is coming together and I think I’m onto something, and this is-in-itself a stage of development for a writer/human/thing ha. I know that I have to keep ironing the shirt (my novel) over and over until it’s as good as it’s going to be. So that’s how I know it’s not good enough yet. It’s not (this book) really thought of as anything important but I know this will be a necessary stone to skip to get further towards where I want to go, so I can’t just blow it off. I don’t know…SEE!

I’m just typing. I’m just posting. I’m only blogging and the sun and the birds are up and I’m well rested and getting tired again. It’s Saturday and I slept for two intervals of a four-hour chunk of time. Hot coffee and lights in room off. Clean clothes and I was going to shave my beard but book not done yet. Canceled book face account (facebook) saying I died on there until I’m done with the (REAL) book, which hopefully will be done by my birthday on May 24th, where (holy shit really) I’ll be 32 and ready to take on the summer. As I said I planned on getting this book  (my projects) done by the spring so I could concentrate on my life again. This looked like it could happen and then it looked like it couldn’t happen, and so I will mention to salute and say thank goodness that the spring this year has become a writer too. What I mean by saying such nonsense is that it goes from sixty to twenty every other day. I was at the beach reading the thesaurus two days ago in the rain and fog and now I’m back in the writing only tree house doing the tap…tap…tap as the snow falls and slowly melts. The birds are (chirping) saying, we came back north for this? What the hell were we thinking? I don’t know Birds, blame evolution and relying on the past or just do what writers/humans do, get used to the chaos. Blah, and so with the weather the way it is, spring has yet to arrive and it’s April 20th today. A Mary Jane holiday if you know what I mean…HA!

Like I said I’m really good at keeping time (even though I don’t get much credit for it) and if everything keeps going the way it’s going well I’ll be ready for the summer like I planned. I’m thinking about what I want to do for the summer still. I’m going to be traveling around with a band for a week writing gonzo style about them (or so they think). After that I want to write a story about dredging and the real cost/benefit that it has on a body of water. I want to write about something strange and dangerous and loving and angry. I want to write about something new and I’m still mauling all that over. I’ll probably just write about birds and the abacus as was originally my backup plan…um…

Anyway so I’m going to edit until 11 a.m. Maybe get to page 45 and then quit for the day and clean up and walk and read and look at things before I feel the desperate need to get back to bed and forget…again.

Below is a short paragraph from The Fear and The Going. Have a good weekend. Peace. 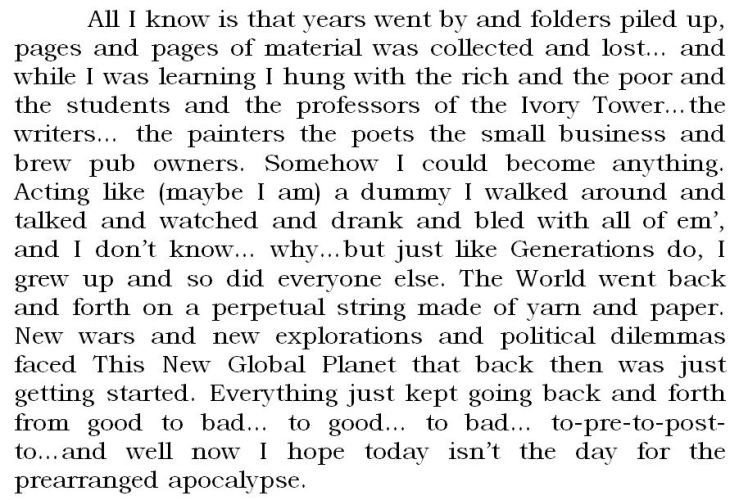