It’s only a matter of time…before, I get bored enough and just start climbing on things that people don’t use. A joke. I think…

What a great day, the winter is finally here, making it feel like the first day of spring, and so the only thing I know about anything right now is this:

Yeah. Let’s just say last night I went on a public relations tour, and damn, it ended the way it probably was going to, with a trip to the Emergency Room.

I’m fine, but man, I’m getting too old for this shit.

Today, a short day after a short sleep I’m just doing what I do, editing and doing the tap tap tap in a splint. I’m a soldier…

Oh man, I just remembered, that before I jumped off a fire escape last night (and I’ll explain that whole fiasco some other time) I was at this real shit dive bar ( it wasn’t even six pm yet) talking to some old drinkers and vampire like humans. I said:

You read? You know, books? to this old man after I gave him a flyer.

This is nice paper he said. “A book of..great importance.” What is this he said.

I don’t know I said. My friend is a writer. I don’t get it. Who’s a writer these days I laughed.

This is real nice paper the guy said.

It’s not that nice I said.

Andrew Kuharevicz. Hey, he yelled at some lady over on the other side of the bar. You know Andy kuharevicz.

Wait she came running over. The music of course stopped. That’s so and so’s son. Yeah that’s him, little Polish boy. How you know him she asked me.

I guess I said.

How you know Andy? and she looked directly at me, as if she was accusing me of bad mouthing him.

Friends, that’s it. I’m just trying to help him out. ha, and the whole bar was trying to figure out who this Andy Kuharevicz kid was, and why he was writing books. They kept talking. I needed some music and another beer. I got a big mug. Thanks I said to the waitress, and then I walked over and played this song by the Beatles on the jukebox and continued on with my weekend bender. I mean, my, public relations tour.

That was two days ago. Besides not being able to move my arm, I feel great. What a sleep. Why hello old man winter, and for no reason at all, I’m going to drive north for a couple days and edit by a different Great Lake, Lake Superior. Paradise. Nice! Have a good week society. 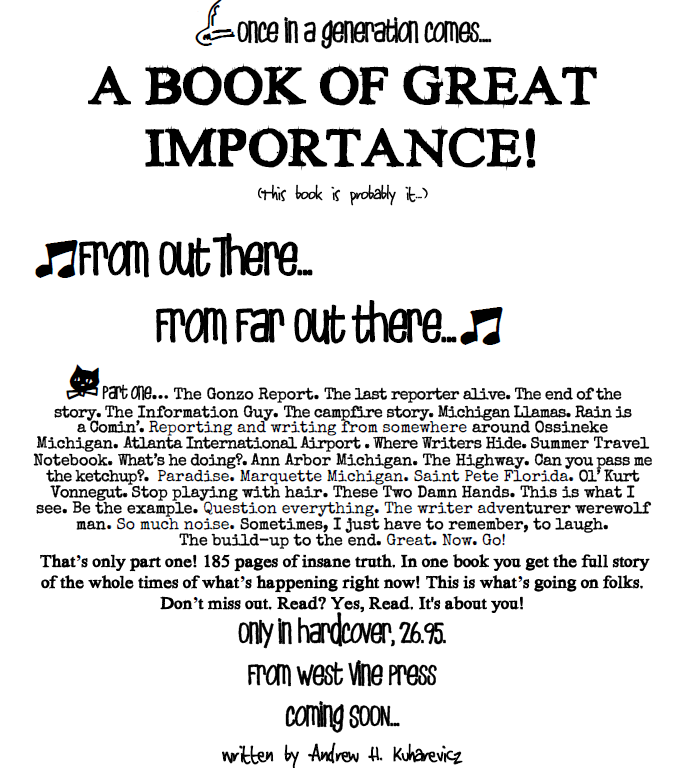