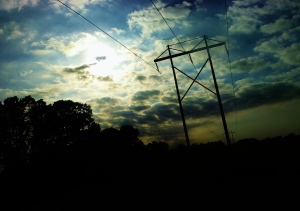 Wasting time.  He has wasted days and minutes and inhaled his memories, and for some reason he could taste sound, and each thought tasted as if they were humming the symphonic notes that sung out for more, more, more; an orchestration that has been growing in its elaboration with the passing of his entire life.

The fall once again comes, and his left ear hurts, but he’s not sure why. Feels like there’s water in it, but he hasn’t been anywhere near the water in months. He keeps tilting his neck to the right side, rolling the bones back to the left, cracking his spine as he tries to shake out whatever is in his ear. He’s been doing this for thirteen days now.

People aren’t moving. Only shadows and outlines of what lives on this land blinks with each mile they drive.

Each city and blade of grass, each tree and white container of fossil fuel; everything that leans and sinks of from the side of highway is recorded down in his memory. He’s the most advanced computer ever built. And everything is the same. And He is them, one of them, the same as them.  He has recently accepted that. His wife called him an old man the other day. He enjoyed her words, respected them, tasted them. Humming, the song just kept growing.

Growing up has taken longer than he ever expected. But then again, he never accepted anything, only that he would die before any of this occurred. He laughs at his fate. He enjoys laughing. He doesn’t understand the word fate. What he does understand, is laughing at such words.

He can’t complain. Faults, he must keep growing. Sins, only man-made ones; adulthood and shame tends to make one silently hesitate. And happiness, there has been some, just, just some. And sorrow, there has been days, weeks, months…wasted.

Hours, nights, whole drawers full of calendars…wasted. Years not even here made from paper. And he could click on his computer and predict the years that he would waste. He felt ashamed knowing what day of the week his birthday would fall upon on the dated year of 2045. This compulsion to organize and waste caused aimless fear to be laughed at.  This was insanity he thought. He was invested within this art of wasting without enjoying that which was wasted, and this was messy.

Waste.He will waste no more.

Bringing his head back towards the rolled equilibrium, he’s Driving, humming; the old man is looking at the sky that’s moving slowly along as if dotted train tracks floating by, as the crawling joints of space are cluttered with hundreds of entangled clouds full of ideas and classical thoughts that he used to imagine hope being hidden within. He laughs. She looks.

Nothing. I just saw an old memory that I forgot I even had.

Up there in the clouds.

Just words. Nothing matters all that much. Just Ideas that hold little to no truth. A smile, the Look between old friends, and the look, the look of hope. He thinks. Never sure. He’s never sure how any of this happens. He only knows that it does.

It’s so beautiful out.

It always is He said. But I always forget. Let’s just go north.