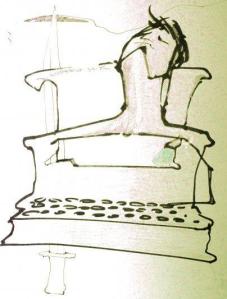 (A few weeks ago I was on a bender, dying, losing it. Now life is still a mess, but I’ve grown, become a better human. Loving. trying. Fighting not to lose goodness. When I wrote this I was angry. My eyes were burning from a war, the life, the constant war I feel I’ve been in. What is unedited below was necessary to my literary survival. It was the darkness that propelled me, for I want peace, and I will learn a new philosophy to live the peaceful life. This is just my journey.)

Education is divorced from reality and reality has been forgotten about. And this is why I leave, this is why I have to try to get out-of-town every weekend. I don’t do cocaine and i don’t care if you do but that makes me not cool. I don’t talk about people at the bar, about local drama, i talk about books and I play way too much with my hair out of this unknown anxiety that has been growing with me. I drink like a champ and I aint even an alcoholic but I drink to forget about what is around me and this yeah, this is not the way to go. Doors locked and no longer at the cabin, and that’s ok, i knew it would end, just like as soon as I got back here I started to listen to music at all hours again, because im alone within the city, within their reality, alone , alone , alone with the class that only wants to be the middle, the class that never wants to try, the class that thinks america is ok again, the class that polluted again, the class that have become terrible parents again, the parents that think there is nothing they can do again, the non political class again, the class that wants to be the lost generation. I’m back within the dream, and I’m the crazy one again.

Now back here, back to the porch, back to the sounds of my street, and they have transformed both from fear and talk between old people who say the place has changed, and it has changed, but im not sure if it has changed because people have left or because people have moved in, both could be happening at the same time. Fear can ruin a neighborhood and people stop talking and suspect everyone. roadways and schools closed off and you can get a house for twenty thousand dollars and most people can’t even afford that, they rent houses and I know for sure that most people care less about their property when then rent. But respect hardly for the old people,  and to most of these younger people well they’ve made it and they pick up right where the mistakes of the past have left off, they think they have a home, and they do, but they don’t like anybody or anyone and they seem, and I don’t know, but based on the way they play their music at all hours of the night and the way their children are screaming and fighting while they are out at the bar, the way the crickets are drowned out by the sirens and the voices of angry people, the sounds of guns shooting and the sounds of phones ringing, well based on all of this it’s hard to write a novel, to get into the groove. Nobody is a neighbor anymore and I grew up on this street and learned how to ride a bike on this street, I learned to love and hate on this street. The deconstruction of the factories and the downtowns have done this, and nothing has been done, and people say they try and maybe they do but these people  can’t even be bothered to feed their dogs, they just yell at them to poop all day and talk about the promotion they DESERVE. Everyone thinks they deserve something, and you know what I think I deserve, some peace and quite and a little bit of respect, because I have been writing now the life of this country and my generation for ten years and nothing, people still think I act like a child and even my ex girl she said you act like you’re twelve and are always going to be poor. I don’t get any of this. I work my ass off picking up trash down by the lake and work and mow lawns and no I don’t know where to get a job because nobody will hire me because they know then they would have to work hard, because I need passion and love for what you do, not waiting for it to be over, bullshit. all of my discipline has gone to the trash like these people throw into creeks and rivers and then they have some nerve to ask me if im on probation when I make minimum wage picking up the styrofoam cup that they throw on the sandy beaches of Michigan in front of my fucking eyes. This used to be a good street and maybe it is, maybe these people have to learn how to be parents before they are good citizens, and this area is not centered around minorities, no, its white kids who think they have to be middle class, that they are middle class, and they make fun of people for bringing back cans or walking the streets, and this is a problem, at least from my eyes. They cut down trees and never take care of what is really important. They talk shit so much shit that I have developed anxiety and the only thing that can drown out their voices is the music the headphones that I have to constantly have in my ears. People think im depressed and that I don’t like them, and really I don’t know if I like them or not, because they are aways talking about money and what they’re going to do when they have more money,  always asking how the neighborhoods are going to hell when it’s already hell for me and one of the main reasons I cant write and work on my novel anymore, because nobody respects anyone, let alone the writer man who for the past month has had to go out-of-town every weekend so that he could settle down the way his body shakes when he’s back in his hometown. And times they change and this is true and now im back, im no longer at the lake, I’m back in the town that i grew up and need to get out of so badly, but being a writer, hate, people dont give me one chance, and my eyes have been hurting so bad lately and for some reason I cant really work here anymore, because of the fireworks and the dog fighting and the  lunatics that have no morals or no right to talk about anything, but they talk; they call me derogatory things all the time. I don’t know, but ive started to stand up for myself and ive been in two fights in the past months. I have little nerve left for letting people who have gone mad act like children and bully me around. I’m the wolf. Now I howl. Get out of my way.