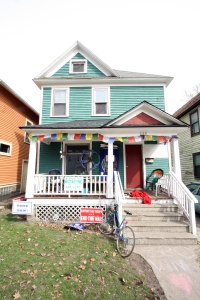 (This is from a notebook written in early 2010, as is. I just got back from one of my many adventures out of the state of Michigan. With a college degree in the liberal arts and obsessed with becoming a writer, and I lived in this art collective for a fifty bucks a month. It was weird. But that is another story all together. Also attached is some writing rules to live by that I made from quotes and rules and paraphrases from the beats and the existentialism of the same period in France, it was in my notebook. I’m not sure which writer said what, so take it for what it is, and If anyone wants a source, just say I don’t know, probably a bit of me and Camus, Kerouac or Ginsberg or…. Either way…)

Sax-aphones-slow down that it heats up like the engine that my father looked at after he spent all day on. without supper and with grease burning on his hands and shit I tried to help I always tried to help but man the beat the glare the look of destiny in his eyes when he fixed one of those old fords or whatever they were was the look of a god of a man a giant man who just destroyed everything and then put it back together with his bare hands.

Nothing stops and everything keeps going and on and on the hands of time wipe away all that you feel on that or this or on this day. dirty cops my roommate said he wanted to kill him some cops-only those who have gotten themselves arrested want to overthrow the systems. Kill him some cops that would be the day. He’s no gangster he’s just another child and the boy of the elite and the educated who will be run down and drug down the social and capitalist roads until all is dried up.

All such hop and fury they all hold but the cause is not postmodern come on postmodern. that word that phrase it sounds like science fiction. there are no star ships and transporters and nothing is moving at the speed of light, well maybe my brain and the chemicals that fire from my hands and out into the external world where I can read with a time delay, read what transpires inside of this mesh this mush this gold mine this wasteland, and this one room studio apartment; this thing this blood and vile based spatial and  this concept this philosophy this mind this word this almost emptied bottle of Jack Daniels that I call my brain.

Another name another word another tenor warms up his lips to the metal and vocal chords shout on the same cliff where jesus tempted the devil. light and dark and this vs that but who’s winning; im not keeping score, is anyone even home in the  box office, finally, at last, thank goodness, finally the greek legends and the roman empire has ended. Postmodern modern pre modern classical romantic beat existential platonic European midwest far east and to the bottom of the oceans and such delightful verses—-and the curtain closes. Kid aint going to kill any cops. Kid aint going g to do anything about anything.