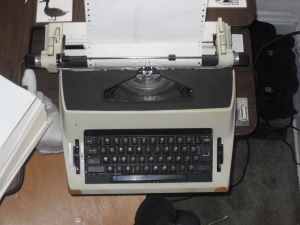 I’ve had three typewriters that I’ve now used; a sears travel, a Remington noiseless steal from 1939, and a Smith Corona Galaxy twelve. The first two were left behind when I was forced to leave a city with as little as possible, or had to pay rent or eat. The last one wasn’t mine but I used it to write a manuscript, so for me, it’s as much part of my typewriter history as the first two. Today I went to some thrift stores, and I don’t have very much of money, so spedning thirty bucks on writing materials is a shopping spree to me. I’m a writer, and I’m not bitter, I like the hard and almost impossible road to being a respected writer. Yeah, it’s emotionally draining and what not and maybe a lost cause, but  I’ve accepted this part of the written life, but today I had a good day. I found a new typewriter, a stack of paper, and got four new books: The

adventures of Augie march by Saul Bellow, the premier book of major poets, a very old version of Ulysses by James Joyce, and no exit and other plays by Sartre. The typewriter is a royal electric, and it’s really heavy, but it’s the only typewriter I can afford as of now. Cost seven bucks and works fine, only needs a new ribbon and I will be set to type on this giant stack of stationary that I found at good will. I only post because this for me was another adventure in writing, and I’m tired and you have to take the minor victories in life, or you will be a mean person, and I don’t want to be a mean person, I just want to write and be happy. Nuff said. Here are some pictures. I will use this machine that I was given, and when I can get a compact travel again I will for sure do that, because of my lifestyle and the weight and my philosophy on writing. I like to sit outside with a typewriter or wherever i feel, but for now, this will do very nicely.